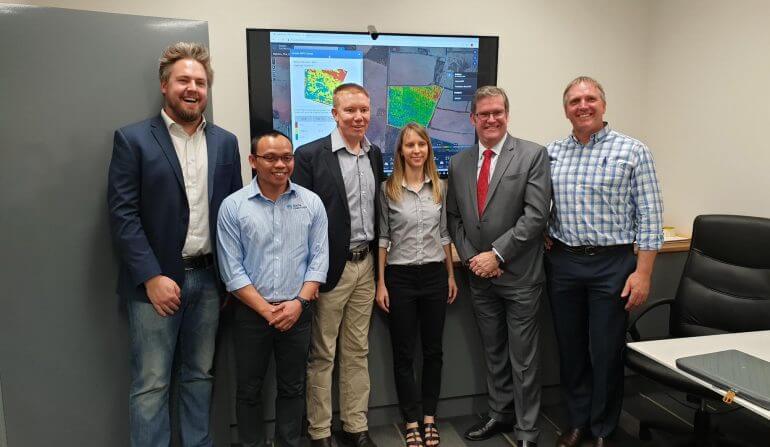 It has been a big week at DataFarming, with the team awarded funding to map every paddock in Australia (you heard right) and winning a coveted spot on global agri-food Innovation Accelerator program, TERRA.

DataFarming has been awarded $50,000 in funding from the Australian Government as part of an initiative with Geoscience Australia.

“From helping to improve decision-making for Australian red meat producers to mapping paddock boundaries and analysing crop data, these innovative projects will give farmers the information they need to make their farms more productive,” Minister Canavan said.

Our project aims to automatically draw every field boundary in Australia using the vast archives of satellite imagery data and machine learning algorithms to define the edge of paddocks.

The outcome of this project will result in a great win for farmers and agronomists. Instead of manually drawing in paddock boundaries in our free satellite imagery platform, the project aims to automatically generate every cropped paddock boundary using DEA technology.

Rather than needing to draw paddocks, it will automatically be done for them. All they will need to do is login to the DataFarming platform – the Digital Agronomist™, select the paddock and generate a free 10x10m satellite image. These are updated every 5 days, making it a great tool for growers and agronomists alike to spot various issues within a crop that can be missed at ground-level. It’s fantastic to be a project recipient and we appreciate the support from the Australian Government and Geoscience Australia,” our Managing Director Tim Neale explained.

Excitingly, we are also about to release a product in October that will provide sub-metre, ultra high resolution image captures at a low cost. Because we’re ultimately working towards making satellite image access easier, cheaper and at a much more granular level than people have had before.

“Congratulations to Tim Neale and the team at DataFarming, as well as Phil Tickle and his team at Cibo Labs, who are demonstrating why Toowoomba is Australia’s agricultural innovation hub with their simple, low-cost products and services for the agriculture industry,” Dr McVeigh said.

In other positive news, we were also announced as part of the 2019 cohort for the international TERRA innovation accelerator program.

TERRA is a program that aims to drive transformation in the food and agriculture industry. It brings together experts, decision-makers, and innovators across the supply chain to create synergies and scalable solutions by pairing emerging growth companies with established multinationals.

According to the organisers, Data Farming was chosen ahead of 300 other applicants from over 50 countries. Tim will head off to San Francisco at the end of September to join leaders from the other 12 companies from this year’s program.

We’re happy to be doing our bit to put precision agriculture in Australia on the map – and of course Toowoomba!